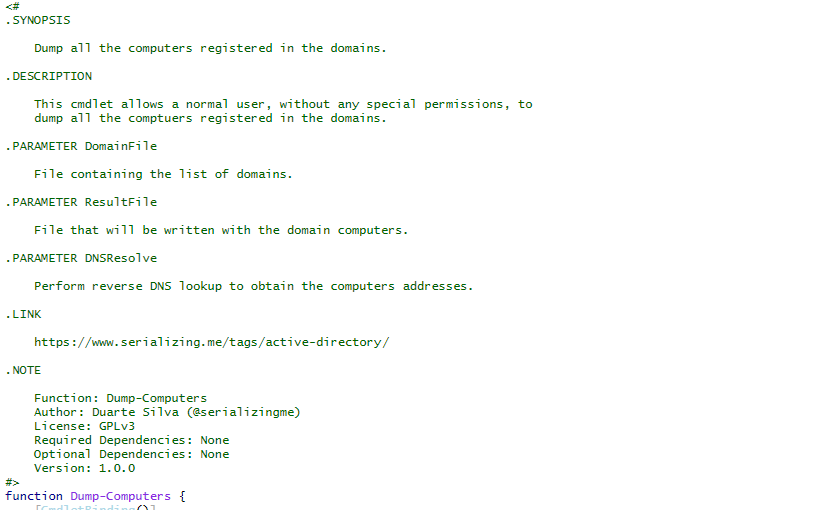 During many penetration tests (or red versus blue team exercises), I have found myself with the need to investigate users, groups, computers and policies of a Windows domain. To do that, I have developed a series of PowerShell scripts that dump all that information from Active Directory into XML files.

Note that these cmdlets, when paired with a code versioning system like Git, are also very useful when performing periodic Active Directory change audits.

The first thing I usually do when I get access to a computer registered in a Windows domain of the target network, is to see if there is any other domains available. The Dump-Domains cmdlet will dump all domains and all trust relationships that can be found. To run the cmdlet just provide the file to where the information is to be dumped as exemplified bellow.

Just because there is a trust relationship between the domain of the current computer or user and another domain, it doesn't necessarily mean that the computer or user account will have access to that trusted domain.

The next step, is to enumerate the computers registered on all the domains found. The Dump-Computers cmdlet will get all computers that are available (and registered in the respective domain) without performing any network scanning. This script is also able to do DNS resolution in order to obtain the computers IP addresses.

Note that enabling the DNS resolution switch as seen bellow, will create a lot of noise due to all the DNS requests that will be done. This will increase the likelihood of triggering security related alerts.

It is also interesting to know what users and groups are available as well as the respective memberships. This makes it easier to identify possible user accounts that can be targeted in order to gain higher privileges or to perform lateral movement on the network. The Dump-Users and Dump-Groups cmdlets will give that information. Follows a example result file for each cmdlet.

Another thing that is very important, especially when looking for ways to escalate privileges in the local computer, is to obtain the Group Policies. To do that there is two cmdlets, Dump-GroupPolicies and Dump-GroupPoliciesFiles. The first will dump the Group Policies information while the second will dump the respective files from the file share they are stored in.

If social engineering is a vector that is allowed in the rules of engagement of the penetration test, the Dump-UsersPhotos cmdlet will dump the users photographs stored on Active Directory. Sometimes it help in researching the targets and possible ways to social engineer them.

The scripts can be found in the project page. Cheers ;)